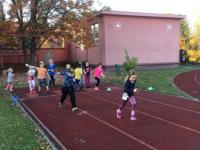 At the beginning of the school year, our school athletic preparation started  its second year of training. Right in the first few weeks, we took par  in the  Autumn Relay Games sport event which involved clubs from  “Athletics for Children“  project. Eight member mixed teams have competed in the 8x30m relay race and the fastest of them can win a relay pin directly from the London Championship.

Another project that we are going to take part in is "Let´s Cheer the Continents" project. In September 2018 Ostrava will host the world most prestigious athletics team competition - the CONTINENTAL CUP. Through the project we will be part of the best men's and women's contests from four continents. What does it involve? Our little athletes´ trainings will be inspired by one of the four participating continents. They will get to know the games played on the continent, the athletes who represent it  or the things that are typical for the continent. We are going to document everything. And where will we be athletes from and when? EUROPE: October – November, AMERICA: December – January ASIA, OCEANIA AND AUSTRALIA: February – March, AFRICA: April – May.After the end of each block and sending documentation, presentations, and other collected material, we will  receive cards with the patrons' signatures of each continent.

So cheer with us! PS: Parents´new ideas appreciated!